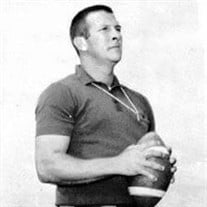 The son of Grant and Mabel Gleason, was born January 28, 1937 in Gulf Port, Mississippi. He was raised by his father, and graduated from Belding High School in 1955. He went to Alma for a year and then enlisted in the United States Marine Corps. He married Vonnie Hock in 1960 in Lakeview, MI, together they lived in Mesick, teaching in Memphis until making their home in Rogers City in 1970.

His contributions to Rogers City were endless, he was hired as a Physical Education teacher, a drivers training teacher, and taught Heath and History at the Rogers City High School. He was inspirational with starting the Rogers City Hockey League in the early 1970's. Mr. G. could not spend enough time with the youth in Rogers City, endless hours coaching football, wrestling, track, and golf. In his spare time he enjoyed hunting, fishing, and playing spitzer.

Cremation arrangements are in care of Hentkowski Funeral Home. There will be a memorial service in honor of Mr. Gleason at a later date.

Memorials are suggested to The Warren Gleason Memorial Fund at the Rogers City High School.
To order memorial trees or send flowers to the family in memory of Warren G Gleason, please visit our flower store.