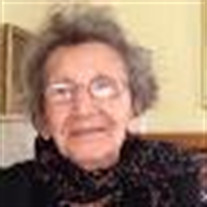 Thora L Bannon, 93, of Rogers City passed from this world to the next March 5, 2015.
She was born in Rogers City and lived most of her life there and in Cedarville, Mi. After her husband Ivan’s death in 1994 she moved to Georgia and then to Florida to be near her daughter. She had recently returned to the Rogers City area.
Thora unreservedly believed in a personal, loving God who answered prayer. Her intercessory prayer ministry deeply impacted many lives over the years. She believed a house could not be too clean, and a person could not be too thin. She believed in a glass or two of wine at 5 and that every meal was a banquet and every gathering a festival. She a believed in fresh flowers, candles and using the good silver every evening at dinner time. She believed that birthdays should not just be a day celebration but a week’s festival. She believed that anything worth doing was worth giving a 150%. She enjoyed picnics and sunsets at Sea Gull Point. She was an artist, an avid reader, a quilter, gardener and cross stitcher. She was a prolific swimmer in her youth and began snow skiing at age 40. She and her husband, Ivan, travelled throughout the United States after his retirement and she was known to trade a quilt or two with the Navajo Indians of the Southwest.
She is survived by her daughter, Jan Camper of Rogers City; her sisters Kathleen (Bugsie) Kowalski of Rogers City and Maggie Dunbar of Onaway ; her brother John Dennis of Onaway; three grand children, Jeff Camper of Ft Myers, Fl., Stephany DuVall of Atlanta, Georgia, and Meliss Lenihan of West Warwick, Rhode Island; ten great grandchildren, Amanda Baird, Maggie, Sara, and Stephen Duvall of Atlanta, GA; Ashton Thomas of Chicago, Il; William and Ivan Matteson, and Breahna Lenihan of West Warwick, RI; Lauren and Haley Camper of Ft Myers, Fl; one great, great grandchild, Olivia Kate Baird of Atlanta, Ga.; and nieces Kathleen Viegelahn, Kerry Wood, Kippy Kauffman, Colleen Malec, Marlene Hanel, Katie Pahl, Bonnie Yard; Susan Frain, Lesia Farner, Penny Treadway, Kelly Darga, Debbie Dennis; nephews Dennis, Pat and Jeff Kowalski, Dennis, Ivan and Bill Bannon, Jerry and Jimmy Bannon , David, Earnest, and John Dennis, Rick, John and Tony Dunbar.
Two memorial services are planned for later this year - a graveside memorial service in Rogers City this Summer and a gathering in Atlanta, Ga. in November. Online condolences may be addressed through www.hentkowskifuneral.com .
To order memorial trees or send flowers to the family in memory of Thora Bannon, please visit our flower store.