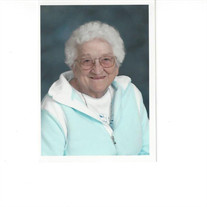 The daughter of Fred and Louise (Bruning) Spens was born April 30, 1919 in Rogers Township. She was united in marriage on June 27, 1937 to Otto Mendrick. Together they owned and operated Mendrick Electric from 1940 until 1987.

Theresa enjoyed painting, knitting, and crochting in her spare time. She was a life long member of Immanuel Lutheran Church in Moltke and belonged to their Ladies Aid, and Choir.

Surviving are a son Gerald (Nancy) of Rogers City; 2 daughters Dolores Merchant of Ocqueoc, and Jeanette Williamson of Frankenmuth; 10 Grandchildren, and 11 great grandchildren.

She was preceded in death my her husband Otto on September 18, 1993.

Visitation will be Saturday December 5, 2015 at Immanuel Lutheran Church in Moltke from 9:00 AM until the 11:00 AM Funeral Service with Pastor Eric Voigt Offciating. Burial will follow in Immanuel Lutheran Cemetery. Online condolences may be sent to www.hentkowskifuneral.com

Memorials are suggested to St John Lutheran School or Immanuel Lutheran Church.
To order memorial trees or send flowers to the family in memory of Theresa Mendrick, please visit our flower store.