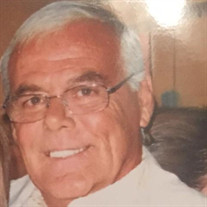 The son of Louis and Eleanor (Warren) was born May 25, 1949 in Rogers City. After graduating from Rogers City High School he enlisted into the United States Army serving his country during the Vietnam War. Shortly after returning home he married Ginger Arlt on February 14, 1970 and together they raised three boys in Rogers City.

Ted retired as a dozer operator from Calcite, and enjoyed spending the winter months in Florida.

He was preceded in death by his parents, three brothers Dick, Louie, Gary; and one sister Carol Boulton.

Visitation will be Thursday January 22, 2015 from 11:00 am until the 1:00 pm Memorial Service at Hentkowski Funeral Home. A luncheon will follow at the Servicemen's Club.

Memorials are suggested to a charity of friends choice.
To order memorial trees or send flowers to the family in memory of Ted Urban Sr., please visit our flower store.