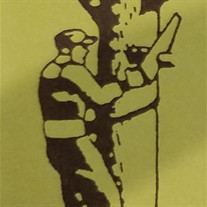 Sid Merchant, 54, of Ocqueoc Township, passed away June 27, 2017 at his home.
The son of Thomas and Beverly (Haselhuhn) was born on August 29, 1962 in Saginaw. He grew up in the Birchrun area. Sid married Jill Coffman on August 1, 1986 together they moved to Ocqueoc Township and made their home.
In 1996 he was proud to start his own business Cutter Tree Care Service. He effortlessly donated many hours to the community on the volunteer fire department as a firefighter and an EMT.
Surviving are his mother Beverly, wife Jill of 30 Years; a son Samuel (Crystal) of Kingsley; a daughter Stephanie (Jeremy) Wendt of Rogers City; 5 Grandchildren Taylor, Bailey, Holly, Adalyn, and Lily; 2 brothers and a sister.
He was preceded in death by his father and a brother.
A Memorial Service will be held in honor of Sid on July 15, 2017 at 11:00 AM at the North Country Baptist Church in Onaway, with Pastor James Barbson officiating, with a luncheon immediately following. On line condolences may be sent to www.hentkowskifuneral.com .
Memorials are suggested to the family of Sid or a charity of friends choice.
To order memorial trees or send flowers to the family in memory of Sid Merchant, please visit our flower store.