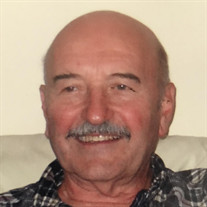 Rueben J. Wojtaszek, 86, of Rogers City, passed away Wednesday night June 6, 2018, at his home.
The son of Joseph and Mary (Markey) was born August 29, 1931 in Rogers City. After graduating in 1950 from Rogers City High School, Rueben entered into the Navy during the Korean conflict. On April 12, 1958 he married the former Sandra Ohlrich and together they recently celebrated their 60th wedding anniversary. Rueben retired after 35 years of service as a millwright from the Abitibi Corporation in Alpena.
Rueben will be remembered by the many who knew him for his beautiful smile and his friendliness. He always focused on the best in people. From a young age he was an avid hunter, and never missed a season. He was musically talented and through the years played the violin for many parties and weddings. After his retirement he made many violins making sure each of his five grandchildren received on in his memory.
Surviving are his wife and the love of his life Sandra; four children, Rueben Jr., Mary Sue Alford, Kristi Bluestone, and Steven Kristina , and five grandchildren Noah, Nikki, Aaron, Simon, and Samuel; also by many in-laws, nieces and nephews.
He was preceded in death by his parents, one son Paul in 1984, one sister Ramona and brother-in-law Edlore Haske.
Cremation arrangements were in care of Hentkowksi Funeral Home a private graveside service will take place at the time of Inurnment at Mount Calvary Cemetery at a later date. Online condolences may be sent to Hentkowskifuneral.com.
To order memorial trees or send flowers to the family in memory of Rueben J Wojtaszek, please visit our flower store.