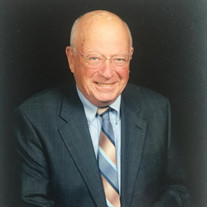 Robert Rene Ross passed away peacefully at home with his family at his side on Monday noon, October 25, 2021, at the age of 96.
He was born on May 2, 1925 to Charles and Renetta (Ifft) Ross in Ellwood City, Pa.
Bob graduated from Lincoln High School in Ellwood City. After graduation he entered the US Marine Corp at the age of 17. He was attached to the Marine 3rd Division 14th Defense Battalion in the theatre of Guam during World War ll. Bob married Colleen Aiken in 1948 with whom he had six children. After being honorably discharged, Bob went to Penn State University on a football scholarship. He was privileged to play both defense and offense in the 1948 Cotton Bowl in Dallas, Texas. He graduated with a degree in Civil Engineering. His early work career led him out of the country developing an iron ore mine for a subsidiary of US Steel Corp. called Quebec Cartier Mining Company. After 14 years working outside the US, he was transferred to run US Steel's Atlantic City mine in Wyoming until it was closed in 1977. He was promoted to Corporate Vice President for US Steel until he retired in 1985. Following retirement, he worked to purchase US Steel's Calcite and Cedarville plants, creating Michigan
Limestone Operations. He was the managing partner until he retired again in 1997. During this time, he met and married Laurie Przybyla in 2006. They traveled extensively and enjoyed Florida winters together.
Also in retirement, he volunteered at McLaren Northern Michigan
Hospital for over ten years. Bob was honored to have been a part of the Mid-Michigan Honor Flight to Washington D.C. in September 2019.
Bob was an active skier and sportsman. He took great pride in self-discipline. Those who knew him will remember his fairness and his interest in others. He will be remembered for his generosity.
Bob is survived by his wife, Laurie, his children Susan (Alain Lavoie) Ross, Linda Ross, Dale Graham, Robin (Frank) Schiro, Robert Jr. (Sandy) and Charles (Beth). Also surviving are eleven grandchildren and 14 great-grandchildren with twin boys due in December.
Bob was preceded in death by his parents, brother Charles, his first wife Colleen, son-in-law Ed Graham and great-grandson Kenny Yovich lll.
Friends may visit at the Hentkowski Funeral Home in Rogers City on Thursday, Oct. 28 from 3pm until 8pm. Visitation will continue on Friday, Oct. 29 at St. Ignatius Church from 12:30pm until the 2pm Mass of Christian Burial.
The family wishes to thank Hospice of Cheboygan and his many caregivers for their loving care during this time.
Memorials may be given to Hospice of Cheboygan, St. Ignatius School, Boys Town, Omaha Home for Boys or The Salvation Army.
To order memorial trees or send flowers to the family in memory of Robert Ross, please visit our flower store.