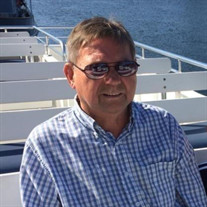 Raymond J. Krajniak, Sr., 79, passed away Sunday morning, April 18, 2021 at MidMichigan Medical Center in Alpena surrounded by his loved ones.
The son of the late Henry and Margaret (Freske) Krajniak Sr. was born on January 23, 1942 at his homestead in Posen. As a young man he moved to Flint and worked as a Tile Mason for 40 Years. He was joined in marriage to Margaret Hoskey on January 25, 1985, and lived in Flint/Swartz Creek together until they moved to Rogers City in 2017.
Raymond was a hardworking man, in his spare time he spent many hours in his garden. He enjoyed making his family Chicken Noodle Soup and homemade baked bread from his kitchen.
Surviving is his wife Margaret; three children Debbie Loxton of Flint, Ray (Jackie) Krajniak Jr., of Milan, and Jessica (Ryan) Dean of Flushing; five brothers Henry Jr., Chester (Kathleen), Sylvester (Beverly), Edwin (Laurie), Alex (Denise); two sisters Ann (Thomas) Hein, and Louanne (Robert) Kleman; ten grandchildren and four great grandchildren.
Visitation will be Friday April 23, 2021 at St. Casimir Catholic Church in Posen from 10:00 AM until the 12:00 PM Funeral Mass. Burial will be in St. Casimir Catholic Cemetery. Online condolences may be sent to hentkowskifuneral.com.
To order memorial trees or send flowers to the family in memory of Raymond J Krajniak, please visit our flower store.