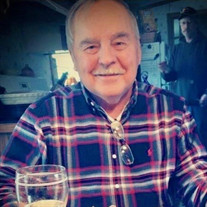 Ralph Ronald “Levy” Lewandowski, age 80 of Rogers City, passed away Thursday night May 21, 2020 at McLaren Northern Michigan Hospital in Petoskey.
Son of Benedict and Martha (Zielaskowski) was born December 20, 1939 in Rogers City, where he was a lifelong resident. He married Jeanette Molski on June 30, 1962 in Posen.
Ralph sailed on the Great Lakes for 42 years retiring as Captain on the John G. Munson in 2002. When he was home and after retirement family time was very special to him, together they enjoyed fishing, hunting, being outdoors and holiday gatherings.
He was preceded in death by his parents.
Surviving are his wife Jeanette, a son Michael, a daughter Jennifer (Gary) Altman all of Rogers City; a granddaughter Rieana of Kalkaska, a sister Shirley (Walt) Purgroski of Vassar, and his best buddy Atti.
A Memorial Service will take place at a later date. Online condolences can be sent to Hentkowskifuneral.com.
Memorials are suggested to St. Ignatius School, St. Ignatius Church, Medilodge Activity Department, or Charity of Friends Choice.
To order memorial trees or send flowers to the family in memory of Ralph R. Lewandowski, please visit our flower store.