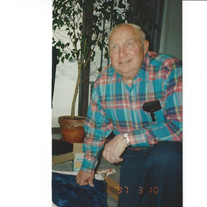 Melvin J. Miller, 91 of Rogers City, passed away very peacefully Thursday evening February 8, 2018 at his home.
The son of John and Martha (Wagner) Miller was born December 10, 1926 in Rogers City. After graduating from Rogers City High School he entered the United States Army. When he returned to Rogers City he met Lorraine Marsh and they were united in marriage on December 17, 1949 at the Presbyterian Church.
Melvin enjoyed the natural beauty of our area in so many ways, he loved the outdoors; an avid fisherman, hunter, trapper, and bird watcher. He built many things several houses, including his own. He had a large part in the building of the VFW in Rogers City, where he was a life member. Melvin was blessed in being able to share and teach these passions with his family, he was a family man; a provider and a man of his words.
Surviving are his wife Lorraine, 3 daughters Linda (Willard) Brege, Vicki (Dennis) Reisener, and Brenda S. Miller all of Rogers City; 3 sisters Marilyn Stone of Rogers City, Jacqueline Andrzejewski of Charleviox, and Carol (Jim) Przybyla of Rogers City; 5 grandchildren Chad and Aaron (Amanda) Brege, Dale Reisener, Josh Burd, Hope, Alex, Spencer, and Sydney Romel; and 5 great grandchildren Johnny, Dakota, Zoey Reisener, Kylee, and Bret Brege.
He was preceded in death by his parents; a daughter Georgann Romel in 1995 and a grandson Dennis Reisener.
Arrangements are in care of Hentkowski Funeral Home, a private burial will take place in Memorial Park Cemetery with Pastor , and military honors by the VFW Post 607. Online condolences may be sent to hentkowskifuneral.com
Memorials are suggested to Rogers City Baptist Church and Hospice of Michigan.
To order memorial trees or send flowers to the family in memory of Melvin Miller, please visit our flower store.