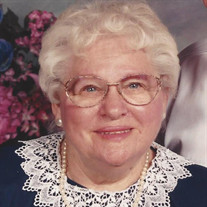 June M. Amacher, 90, of Rogers City passed away Monday evening May 2, 2016, at Tendercare Health Center in Rogers City.
The daughter of Harold and Alice (Fleming) Wright was born on November 3, 1925 in Rogers City where she has lived and raised her family her entire life. On April 29, 1944 she married Edward Amacher at St. John Lutheran Church in Rogers City.
She was a member of St. John Lutheran Church, and a past member of its Ladies Aid, a life member of both the Veterans of Foreign Wars, and the Disabled American Veterans Auxiliaries. June was also a very avid Detroit Tigers fan, and enjoyed watching all of their games.
She was preceded in death my Ed on March 7, 2003; brothers Howard and Kenneth Wright; a grandson Brian Eldridge; and a great grandson Harrison Guenterberg.
Surviving are 4 daughters Darla (Allen) Erke of Rogers City, Sue (Bruce) Eldridge of Cheboygan, Janice (Terry) Bisson of Rogers City, Jane (Randal) Zemple of Port Austin; 15 grandchildren, 29 great grandchildren, and 5 great great grandchildren; and a brother Richard Wright (Barb Konieczny) of Rogers City.
Visitation will be Thursday May 5, 2016 from 12:00 PM until the 1:00 PM Funeral Service at Hentkowski Funeral Chapel with Pastor Eric Voigt Officiating. Burial will be in Memorial Park Cemetery.
Memorials are suggested to St. John Lutheran Radio Fund in Rogers City.
To order memorial trees or send flowers to the family in memory of June M Amacher, please visit our flower store.