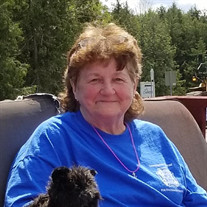 Jacklyn “Jackie” Fay Spens, 78, of Onaway passed away Monday afternoon November 5, 2018 at Medilodge of Rogers City.
The daughter of Cecil and Marge (Buzzard) Griffith was born June 1, 1940 in Detroit, and raised in Warren. Jackie was a 1958 graduate from Centerline High School. She began raising her family down state until moving them to the Hawks area in 1972.
Jackie worked 30 years doing various positions at Northern Evergreen in Onaway. She began dating Michael Bruning and together they have worked, traveled and been by one another’s side since 1990. Since 1995 she was a very active and proud member of The VFW Auxiliary 607, always holding an office including past President of Auxiliary 607, and going further as past President of our District 13. She was also a member at St Michael Lutheran Church in Belknap.
She was preceded in death by her parents.
Surviving is Michael Bruning of Onaway, 1 son John (Kerry) Spens of St. Clair Shores, 2 daughters Margaret “Peggy” Spens of Fowlerville, and Marilyn (Joseph) Malick of Clinton Township; 5 grandchildren Michael, Wayne, Amanda, Margaret, and Jacklyn; 4 great grandchildren; 3 brothers Harold (Linda) Griffith, Jim Griffith, and Ed (Gail) Griffith; 3 sisters Sharon Miller, Dawn (Howard) Lingerfelt, and Margie Thompson; several nieces and nephews.
Visitation will be at Hentkowski Funeral Home Thursday November 8, 2018 from 4:00 PM until 8:00 PM with The VFW Auxiliary 607 Ritual at 7:00 PM. Visitation will continue Friday at St. Michael Lutheran Church in Belknap at 10:00 AM with Pastor Paul Boerger officiating her Funeral Service at 11:00 AM. Burial will be following at St. Michael Lutheran Cemetery. Online condolences may be sent to Hentkowskifuneral.com
Memorials are suggested to VFW Auxiliary 607.
To order memorial trees or send flowers to the family in memory of Jackie Spens, please visit our flower store.