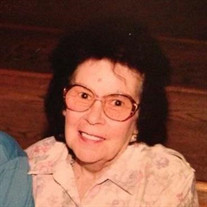 Gene Atkins, 88, of Rogers City, passed away peacefully, surrounded by her family following a brief illness Sunday afternoon February 11, 2018 in Rogers City.
The daughter of Stanley and Mary (Jaracz) Muzyl was born in Detroit on September 21, 1929. Gene grew up in the Gaylord area and graduated from Gaylord High School. She met Willard “Red” Atkins and they were united in marriage June 16, 1951 in Gaylord. Making their home in Rogers City, she was a devoted wife and mother. Gene was blessed with a large family, and was very secure with her Christian faith and spent many hours honoring her beliefs daily.
Surviving are 3 sons Richard (Erin), Michael (Trish), and James; 6 daughters Beverly (Ted) Getzmeyer, Jeanette Atkins, Diane (Steve) Porter, Yvonne (Neil) Brege, Sally (John) Meharg, Nancy (Chris) Tulgestka all of Rogers City; 29 grandchildren; 34 great grandchildren; 2 sister in laws Marleah Muzyl, and Lee Atkins; 1 brother in law Edward McNamara; several nieces and nephews.
Gene was preceded in death by her husband Willard “Red” in 2013; 4 brothers Joe, Edward, Bruno, and Chester; her sister and brother in laws Jane Muzyl, Peg McNamara, Andy and Barb Atkins, Alberta Muzyl and Perry Atkins.
Visitation will be Thursday February 15, 2018 at Hentkowski Funeral Home from 3:00 pm until 8:00 pm with the Rosary being recited at 6:45 pm and a parish prayer service at 7:00 pm. Visitation will continue on Friday at 9:30 am at the funeral home, the Funeral Mass will follow at 11:00 am at St Ignatius Catholic Church with Father Fitzpatrick officiating. Burial will be at Mount Calvary Cemetery in the spring. Online condolences may be sent to hentkowskifuneral.com.
Memorials are suggested to Saint Ignatius Catholic School.
To order memorial trees or send flowers to the family in memory of Gene Atkins, please visit our flower store.