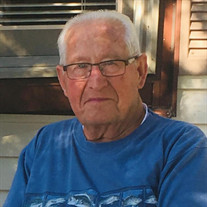 Edmund “Eddie” Kapala, 86, of Presque Isle passed away Tuesday morning June 30, 2020 at his home.
Son of John and Lucy (Zielinski) Kapala was born in Rogers City on January 21, 1934. Ed graduated from Rogers City High School in 1953. After graduation he entered into the United States Army in 1954, during his service time he came home and married Jacqueline Wirgau on April 30, 1955 at St. Ignatius Catholic Church, together they went to California where he was stationed.
After returning to Rogers City in 1956, he immediately began working for Mel’s Market, where he was a well-known meat cutter, purchasing the store in 1974. Customers of the store remember his whistling as he worked, he retired in 1992 and moved to Grand Lake. He was an avid fisherman and enjoyed taking Jackie and his grandson’s, he also enjoyed hunting and going to camp. Ed was a member of St. Ignatius Catholic Church and it's Knights of Columbus.
Surviving are his wife Jackie, 3 children Kurt (Ruth) Kapala, Kevin (Sally) Kapala all of Presque Isle, Gretchen Gordon of South Carolina; 5 grandchildren Chad, Aaron, Simone, Camille, and Christopher; 6 great grandchildren Bentley, Bryce, Olivia, Colton, Renee, and Ross; a sister Irene Yule of Alpena, and a brother Jim (Del) Kapala of Bay City.
He was preceded in death by his parents, a son-in-law Charles Gordon and a grandson Joshua Gordon.
A private graveside service will take place in memory of Eddie. Online condolences maybe sent Hentkowskifuneralhome.com.
Memorials are suggested to Hospice of Michigan.
To order memorial trees or send flowers to the family in memory of Edmund John Kapala, please visit our flower store.