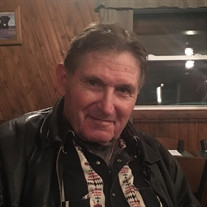 Dominic (Danny) James Hentkowski passed away peacefully with his family by his side Friday April 7, 2017 at MidMichigan Medical Center in Alpena.
The son of Blanche (Nowicki) and Steve Hentkowski was born in Hawks on February 11, 1943. As a young boy he worked grading potatoes on the Delekta Farm. After graduating from Posen High School, he sailed for a year and went on to work for United States Steel (Calcite) from 1963 until his retirement in 1993. While working for the Quarry, Danny worked in the woods between shifts and began Hentkowski and Sons Forest products in 1966, just recently celebrating 50 years is business.
He always loved the warmth of being with family and friends, sharing stories and playing music. He had a love for music and enjoyed playing different string instruments and taking his guitar with him where ever he went. Danny was very committed to his religion he was a member of Saint Ignatius Catholic Church, effortlessly ushered for 50 years, was a 4th degree member of the Knights of Columbus, and reciting the rosary gave him fulfillment on a daily basis.
Danny was preceded in death by his Father Steve in 1999.
Surviving are his mother Blanche of Hawks, his ex-wife and best friend for 56 years Diane, 3 sons Matthew (Laura), Mark (Francis), Nathan (Corinne); a daughter Milissa (Bill) Bannon all of Rogers City; 9 brothers Eugene (Anne) of Mason, Jimmie (Mary Jane) of Posen, Jerry (Rosemary) of Posen, Ron (Bonnie) of Florida, Allan (Cindy), Stevie (Mary), Jeffery (Julie), and Eric, of Posen, Mitchell (Jennifer) of Oklahoma; 3 sisters Diana (Don) Ketclaar of Howard City, Marie (Kim) Behring of Hillman, and Tammy (Eric) Hincka of Posen; 13 grandchildren Heather, Logan, Ethan, Jordan, Linnea, MiKaela, Hannah, Chloe, Christian, Hayden, Autumn, Blake, and Preston.
Visitation will be Tuesday April 11, 2017 at Hentkowski Funeral Home, From 3 until 8 pm, The Knights of Columbus will recite the Rosary at 6:45 pm and a Parish Prayer Service will follow at 7:00 pm. Visitation will continue on Wednesday at the funeral home at 10:00 am with an 11:00 am Funeral Mass at St Ignatius Catholic Church with Father James Fitzpatrick officiating. Burial will be immediately following at Mount Calvary Cemetery. Online condolences can be sent to hentkowskifuneral.com.
Memorials are suggested to Hospice of Michigan or to the family for a memorial garden in Danny’s memory.
To order memorial trees or send flowers to the family in memory of Dominic James Hentkowski, please visit our flower store.