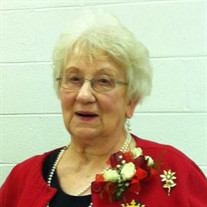 Cecelia Dembny, 92, of Rogers City passed away Saturday morning March 2, 2019 at Orchard Foster Care Home in Posen Towsnship.
The daughter of the late Stanley and Agnes (Kierzek) Roznowski was born November 18, 1926 in Posen. On November 9, 1943 she married Joe Krawczak who preceded her in death when the SS Carl D. Bradley sank on November 18, 1958. She then married Louis Dembny on August 26, 1961 he preceded her in death on January 24, 2012.
Cecelia was a true homemaker caring for her family and home. Her passions were gardening, sewing, baking, and cooking, but the biggest joy of her life was her grandchildren and great grandchildren. She was known for her wit, sass, and great sense of humor. She was a member of St. Ignatius Catholic Church, its Rosary Society, and Daughters of Isabella 974.
She was preceded in death by her two husbands Joe and Louis; a daughter Kathy Krawczak on January 12, 2019; six brothers Eugene, Lenard, Alphonse, Sylvester, Bruno, and Raymond; two sisters Helen Brezinski, and Regina Durecki; a granddaughter Karen Stiver, two son-in-law’s John Boyk, and Doug McCrumb.
Surviving are six children Ronald (Sandra) Krawczak of Rogers City, JaCinta Boyk of Alpena, Rose McCrumb (Mike) of Lansing, Andrea (David) Robinson of Gaylord, JoLynn (David) Zalewski of Ocqueoc, , and Cella (Kendrick) Bade of Rogers City; three sisters Betty Dembny of Gaylord, Ann Haske of Metz, and Sally (Arnold) Fuhrman of Midland; twelve grandchildren and thirteen great grandchildren.
Visitation will be Thursday March 7, 2019 at Hentkowski Funeral Home at 3:00 p.m. with the Rosary beginning at 6:45 p.m. and a Prayer Service at 7:00 p.m. Visitation will continue Friday morning at St. Ignatius Catholic Church at 9:30 a.m. with a 10:30 a.m. Funeral Mass with Father Rolando Silva Officiating. Burial will be in the spring at Mount Calvary Cemetery. Online condolences can be sent to hentkowskifuneral.com.
Memorials are suggested to St. Ignatius Catholic School, Hospice of Michigan, and Orchard Foster Care Home.
To order memorial trees or send flowers to the family in memory of Cecelia Dembny, please visit our flower store.