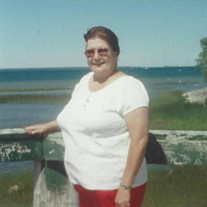 Catherine A. Sorgenfrei, 82, of Moltke passed away Tuesday evening November 2, 2021 at Orchard Adult Foster Care in Posen Township.
The daughter of Frederick and Isabel (Curtis) Pommerenke was born August 19, 1939 in Moltke Township. Cathy graduated from Rogers City High School in 1957. After she graduated she traveled the world with her first military husband William Hinchcliff together they had 3 children. In 1977 she married Rondoll Stone they made their home in Killeen Texas, together they had one son.
Cathy moved back to Moltke in 2002, she met Gerald Sorgenfrei and they were married in 2005. Together they enjoyed dancing, playing cards with friends and family, and traveling. They were members of the German American Club and senior league bowling team.
Surviving are her husband Gerald, four children David (Debbie) Hinchcliff, Kenneth Hinchcliff, Melissa (Donald) Brown, and Rondoll Stone II; two step daughters Vicki (Jeff) Sherry, and Sherry (Charles) Kuznicki; a brother Harold (Audrey) Pommerenke, a sister Emily (Dan) Budnick; six grandchildren, four step grandchildren, and four great grandchildren.
She was preceded in death by her parents, and her first two husbands William and Rondoll.
Visitation will be Saturday November 6, 2021 at Hentkowski Funeral Home, from 12:00 Noon until the 2:00 PM Funeral, with Reverend Mary Hughes officiating. Burial will be at St. James Cemetery in Moltke.
Memorials are suggested to St. James Lutheran Church, and McLaren Hospice.
To order memorial trees or send flowers to the family in memory of Cathy A. Sorgenfrei, please visit our flower store.