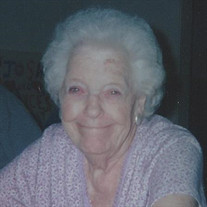 Carmen Marie Smigelski, 90, of Rogers City passed away Thursday February 28, 2019 at her home.
The daughter of the late Aberham and Laura Bell (Hart) Morgan was born November 4, 1928 in North Allis Township, as a young girl her father passed away and her mother remarried John Boyce who took care of the family.
After high school Carmen worked for the garment factory in Onaway, she then met Leonard and they were married on March 30, 1953 in Bay City where they made their home until retiring back to Rogers City. She enjoyed gambling, scratch off lottery tickets and bingo. She had a great sense of humor that kept everyone on their toes.
Surviving are her daughter Sandra (Elmer) Whaley of Rogers City and many nieces and nephews.
Carmen was preceded in death by her husband Leonard; four brothers, Angus, Richard, Armond and Freemont; four sisters, Zola Walters, Marqueritte Wisesegart, Joyce Frasier and Annie Haupert.
Visitation will be Tuesday, March 5, 2019 at Hentkowski Funeral Home from 11:00 a.m. until the time of a memorial service at 1:00 p.m. with the Chaplain Bob Coen officiating. Inurnment will be at Mount Calvary cemetery in the spring. Online condolences can be expressed at www.hentkowskifuneral.com .
Memorials are suggested to McLaren Hospice of Alpena.
To order memorial trees or send flowers to the family in memory of Carmen Marie Smigelski, please visit our flower store.