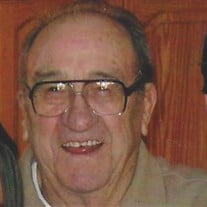 Carl J. Bruning, Jr. 89, of Rogers Township, passed away Monday morning August 27, 2018 at MidMichigan Medical Center in Alpena.
Son of the late Carl and Martha (Wagner) was born June 3, 1929 in Rogers City. Carl served his country in the United States Navy from 1950 until 1954. He was joined in marriage to Delores Krey on June 24, 1951 in Three Rivers, Michigan together they made their home and raised their children in Rogers City.
Carl worked for several years at Vogelheim Lumber Company as a carpenter, until going to work for and retiring from Stone Port in 1992. He enjoyed and spent many years hunting and fishing. Carl was a member of the American Legion in Rogers City, and Trinity Evangelical Lutheran Church where his carpentry skills were used to assist in the building of his church.
Surviving are 4 children Cheryl Liska of Wisconsin, Lori (Craig) Taylor of Davison, Mark (Pamela) of Texas, and Wayne (Sara) of Rogers City; 4 grandchildren Holly, Morgan, Matthew, and Savannah; 4 great grandchildren Noah, Landon, Ethan, and Summer; and many nieces and nephews.
He was preceded in death by his wife Delores on December 27, 2008; a son-in-law Christopher Liska; and 5 sisters Leora, Doris, Geraldine, Ruth, and Carla.
A Memorial Service will be given for him on September 6, 2018 at Trinity Evangelical Lutheran Church in Rogers Township. Visitation will be at 10:00 AM followed by an 11:00 AM service with Pastor Thomas Smuda officiating. Burial will be in Memorial Park Cemetery immediately following the service. Cremation arrangements are in care of Hentkowski Funeral Home, and online condolences may be sent to www.hentkowskifuneral.com .
Memorials are suggested to Trinity Evangelical Lutheran Church.
To order memorial trees or send flowers to the family in memory of Carl J Bruning, Jr., please visit our flower store.