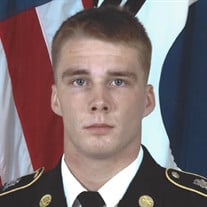 Brandon M. “Don” Haneckow, 25, of Rogers City, passed from this life September 18, 2017 at Mercy Hospital in Muskegon, with his loved ones at his bedside. He was born on April 5th, 1992 to Janel Haneckow and Bill Reutter in Alpena.
On June 6th, 2010 he graduated from Rogers City High School. During his tenure at Rogers City High School, Brandon participated in Natural Helpers and lettered in three varsity sports. In the fall, on Friday nights, he wore #10 for the Rogers City Hurons football team. In the winter, he wrestled at 152lbs for the Hurons Wrestling program. In the spring, he served as the team captain of the Hurons Track program, where he made back-to-back state final appearances in 2009 and 2010 as an exceptional high-jumper.
After high school, Brandon enlisted in the United States Army. Brandon served as a paratrooper in the 82nd Airborne Division, assigned to the 65th Military Police Company, 503rd Military Police Battalion, 16th Military Police Brigade. After four years and eleven months of service, having been deployed to both Qatar and South Korea, Brandon was honorably discharged at the rank of Sergeant in the spring of 2015. During his time in the Army, Brandon was also enrolled at Ashford University where he earned two Bachelor’s degrees; one in Business Administration and the other in Real Estate Studies.
Following his military service, Brandon moved back to Michigan where he enrolled at Grand Valley State University. He graduated in the spring of 2017, with a Bachelor’s degree in Biomedical Science. Brandon then enrolled in Ferris State University’s School of Pharmacy as a Pharm. D. candidate and began classes in August of 2017.
Brandon was not only a terrific son, brother, and father; he was also an amazing friend and community member. He was a devout Lutheran and a member of St. John’s Lutheran Church in Rogers City. He was proud to be raised in Rogers City and he let everyone that he encountered know that. His devotion was exemplified with his membership and participation in the Rogers Masonic Lodge No. 493; Veterans of Foreign Wars, Post 607; Military Police Regimental Association; Student Veterans of America; Colleges Against Cancer; and the American Chemical Society. His friends and family would describe him as determined, dependable, intellectual, courageous, and passionate. Brandon made every second of every day count.
Brandon was preceded in death by his sister, Nicole Faye Molzan, (August 22nd, 1997); his grandparents Robert and Mona Haneckow; and grandfather Hugh Ruetter.
He is survived by his daughter, Lorelei Haneckow; wife Grace; mother, Janel Haneckow, and step-father, Jon Molzan; his father, Bill Reutter; 2 brothers, Andrew Selke and Jonathan Molzan; father-in-law and mother-in-law Chad and Rebecka VanDyke; a grandmother Muriel Reutter; many aunts, uncles, cousins and friends.
Visitation will be Friday September 22, 2017 at 4:00 until 8:00 PM with a Military Tribute at 6:45 PM with a Prayer Service following. Visitation will continue Saturday at St. John Lutheran Church in Rogers City at 10:00 Am until the 11:00 AM Funeral service with Pastor Eric Voigt officiating. Burial will be immediately following at St. Paul Lutheran Cemetery in Posen. Online condolences may be sent to www.hentkowskifuneral.com .
To order memorial trees or send flowers to the family in memory of Brandon Michael Haneckow, please visit our flower store.