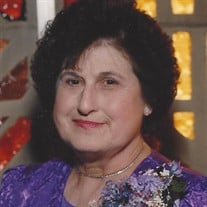 Blanche Barbara Hentkowski, 94, of Hawks, went home to be with our Lord on June 22, 2019. Blanche was born June 13, 1925 to the late Joseph and Bernice (Kapala) Nowicki on the family farm in Pulawski Township.
Blanche was well known for her large family and the sacrifices she made for her children to ensure their opportunities in life. She was well known for her many thousands of canned dill pickles that she made and gave away in her lifetime. Her homemade bread was a family favorite, and she would always send you home with a loaf. Her love of flowers ensured there was always some growing every summer around the house; for her own enjoyment as well as for all who came to visit. It would be impossible for anyone to know how many rosaries and prayers she prayed for those she loved throughout her lifetime, when she thought they might be in need of those intersessions. Holidays, birthdays, and special events never went unnoticed to Buscia, she was proud to host large family gatherings under her roof. These are a few of the most cherished memories that will missed now that she has left this earthly world.
Blanche was married to the late Steve Joseph Hentkowski and became a mother to 13 children, grandmother to 40 grandchildren, 57 great grandchildren and 5 great-great grandchildren. Though she has departed from us, her legacy and memory will live on for years in the family she mothered.
She is preceded in death by her oldest son, Dominic (Danny) who died April 7, 2017 and two grandchildren in 1977 and 1999; four of her brothers Harry, Dominic, Bernard, and Edmund Nowicki.
She is survived by her children, Eugene (Anne) of Mason, Dianna (Don) Ketelaar of Howard City, Jimmie (Mary Jane) of Posen, Jerry (Rosanne Morris) of Posen, Ronald of Ft Meyers, FL, Marie (Kim) Behring of Hillman, Allan (Cindy) of Posen, Steven (Mary) of Posen, Jeffrey (Julie Kamyszek) of Metz, Eric of Posen, Mitchell (Jennifer) of Claremore, OK and Tammy (Eric) Hincka of Posen; five sisters Lucey Paul, Virginia (Art) Smolinski, Florence Wozniak, Bernice Krajniak , Theresa Cendrowski; and all of her grandchildren.
Visitation will be at the Hentkowski Funeral Home on Wednesday, June 26, 2019 from 4:00 until 9:00 PM. The Rosary will begin at 6:30 PM with a Prayer Service to follow at 7:00 PM. Visitation will continue Thursday at 10:00 AM with the Mass of Christian Burial following at 11:00 AM at St. Casimir Catholic Church in Posen with Fr. Arthur Duchnowicz officiating. Burial will follow at St. Casimir Catholic Cemetery. Online condolences can be sent to hentkowskifuneral.com.
Memorials are suggested to St. Casimir youth group and CCD group in care of Mary Hentkowski.
To order memorial trees or send flowers to the family in memory of Blanche Hentkowski, please visit our flower store.