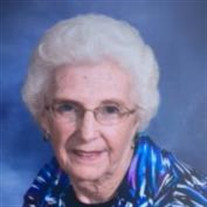 Bernadette “Tootie” Smith, 85, of Rogers City, passed away Tuesday morning September 26, 2017, at Tendercare Health Center in Rogers City.
The daughter of Reynold and Catherine (Thompson) Dumsch was born March 8, 1932 in Rogers City. Tootie married Ralph on April 29, 1950 at St. Ignatius Catholic Church together they lived and raised their family in Rogers City.
Tootie enjoyed spending many years as a noon hour aid at the Rogers City Elementary School. She had a great love for her antiques, and stained glass, and enjoyed spending time at the casino. Tootie was a member of the VFW Post 607 Ladies Auxiliary and St. Ignatius Catholic Church.
Surviving are a daughter Julie (Jeffery) Fleming of Rogers City; 3 grandchildren Gina (Todd) Elowsky, Cody (Karen) Fleming, and Andrea Smith; 4 great grandchildren Alexis Elowsky, Ava and Mason Walker, Cameron and Boston Fleming, and Cody Elowsky; a great great granddaughter Leah; and a brother Robert (Sally) Dumsch of Alpena.
She was preceded in death by her parents; her husband Ralph on October 5, 2013; 2 sons Jon and Randy; and a brother Lee Kleiber.
Visitation will be Saturday September 30, 2017 at St. Ignatius Catholic Church from 10:00 AM until the 11:00 AM Memorial Mass with Father Fitzpatrick Officiating. Burial of Tooties ashes will be immediately following in Memorial Park Cemetery. A Luncheon will be provided at the VFW Post 607 downstairs hall.
Memorials are suggested Hospice &Palliative Care Compassus Atlanta, Michigan.
To order memorial trees or send flowers to the family in memory of Bernadette Smith, please visit our flower store.