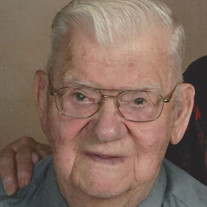 Alphonse Glomski, age 88, of Alpena, passed away Friday evening August 30, 2019, at his home surrounded by his family.
The son of Max and Johanna (Modrzynski) Glomski was born in Posen on October 4, 1930. He married Rosemary Dault on June 28, 1952 at St. Ignatius Catholic Church. They lived in Rogers City for a short period of time, until moving to the Alpena area to raise their family. Together they were the best parents six sons could ever have.
Alphonse worked for various construction companies as a heavy equipment operator and driving trucks in the area, retiring from Goodrich in 2010. He enjoyed being with his family, camping, deer hunting, and going to the kids ballgames. He was an honorary life member of the Knights of Columbus 3rd Degree 6851 Thunder Bay Council of Ossineke, and a member of All Saints Catholic Church in Alpena
Surviving are his wife Rosemary, 6 sons David (Evelyn), Jeffery (Kitty), Alan (Jodi), Kenneth, Steven (Susan), and Terry, all living in the Alpena area; 3 brothers Lawrence (Gail), Gerald (Dolores), and Dan (Wendy); 4 sisters Delphine Ohlrich, Barbara (Leonard) LaTulip, Sally (Harry) Daniels, Maxine (Jerry) Shemanski; 12 grandchildren Jeremy, Leigh Ann, Denise, Rebecca, Jessica, Holly, Dana, Hope, Chance, Andrew, Jana and Brooke; and 22 great grandchildren.
He was preceded in death by his parents, 3 grandchildren Timothy, Brett, and Kaitlyn; a brother Joseph, 3 sisters Geraldine, Angeline and Irene.
Visitation will be Tuesday September 3, 2019 at Hentkowski Funeral Home in Rogers City from 3:00 until 8:00 PM, with a Prayer Service at 7:00 PM. Visitation will continue Wednesday morning at St. Anne’s All Saints Catholic Church in Alpena at 10:00 AM until the 11:00 AM Funeral Mass with Father Joe Muszkiewicz officiating. Burial will be at Holy Cross Cemetery. Online condolences may be sent to hentkowskifuneral.com.
Memorials are suggested to Hospice of Michigan.
To order memorial trees or send flowers to the family in memory of Alphonse Glomski, please visit our flower store.