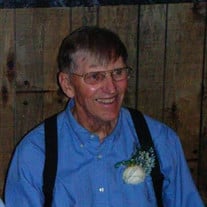 Allan H. Erke, age 82 of Belknap Township, passed away Tuesday afternoon May 29, 2018 at his home.
The son of John and Mable (Lamb) was born on December 7, 1935. Allan was born, grew up and raised his family in Belknap Township. He married Darla Amacher on May 30, 1970 at St. John Lutheran Church in Haggensville.

A man with a smile is how he can be remembered; farming and family were his life. As a young man at the age of 14, he finished grade school to help his family on the farm. He never went far from home and was completely content with that. Farming was his passion until the end, running his hands through the soy beans hours before his passing. His grandchildren held a very special spot in his heart; and he will be greatly missed by them, and the rest of his family. He was an active member at St. John Lutheran Church in Haggensville.

Preceded in death are his parents, a grandson, Harrison Guenterberg, a sister and brother in law Laurel and Peter White.