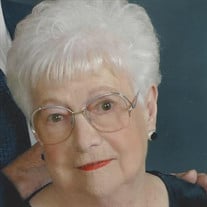 Aileen “Potsy” D. Johnson, 91, of Rogers City, was called home Wednesday April 13, 2016 at her daughters home in Cadillac.
The daughter of John and Margaret (Greta Zemple) Wirgau was born October 8, 1924 in Rogers City. Potsy was her given nickname by her brother Ivan. A graduate from Rogers City High School, on March 27, 1948 she was joined in holy marriage to Ernest Johnson in the old St. John Lutheran Church.
Potsy worked at Callahan’s drug store for a while and always talked about ice cream sodas, and then worked as a telephone operator and office person for General Telephone Company. After the office closed she began working and retired as a teller for Calcite Credit Union.
She was a member of St. John Lutheran Church her entire life, and was very involved including being on the altar guild, taking care of the candles, and financial secretary. A member of the women’s bible study for over 30 years, when she had to step back because of her health, she sadly missed the social time spent with everyone.
Family and friends were very important, always feeling blessed with the excitement and memories they made. Potsy liked crocheting various dollies, table cloths, runners and loved being able to give them away to family and friends. She also enjoyed puzzles, word search, and recently began reading books, 4 to 5 a week.
Surviving are two daughters Debra (Mark) Chimner of Cheboygan, Nancy (Dan) Redes of Cadillac (formerly of Breckenridge); a son Wade (Mary) of Shepard; six grandchildren Travis (Jenny) Redes of Sand Lake, Adam (Tina) Redes of Shepard, Alana Johnson of Mt. Pleasant, Nathan Johnson of California, David Corlett of Florida; GG will also be missed by five great grandchildren Christina Coyle, Mylie, Danica, Logan, and Cole Redes; two sisters Jaqueline (Edward) Kapala of Rogers City, June (Henry) Keubler of Metz.
She was preceded in death by her husband Ernest on April 19, 2011; a grandson Douglas Corlett and his father Jack Corlett; four sisters Myrtabel Modrinski, Viola Modrinski, Betty Opland, and Joyce Routley; and a brother Ivan Wirgau.
Visitation will be Saturday April 16, 2016 at 3:00 PM with a 6:30 PM prayer service at Hentkowski Funeral Home. Visitation will continue Sunday from 1:00 PM until the 2:00 PM Funeral Service at St. John Lutheran Church in Rogers City with Pastor Eric Voigt officiating. Inurnment will be in Memorial Park Cemetery.
In lieu of flowers memorials are suggested to Hospice of Michigan, St. John Lutheran School or the radio fund.
Online condolences may be sent to www.hentkowskifuneral.com .
To order memorial trees or send flowers to the family in memory of Aileen "Potsy" Johnson, please visit our flower store.